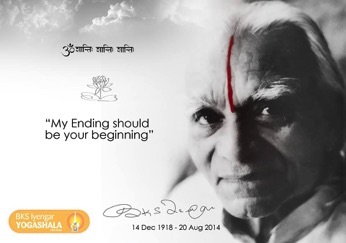 He was born in Bellur, a small and very poor village in South India. He became teacher of Yoga at the age of 18.  Being the world’s foremost exponent of yoga, he continued to practise, teach, advise and inspire his students throughout the world until his death in 2014.

He believed in demystifying yoga by showing that it is open to all regardless of age, race or creed. He saw yoga as art, a science, a philosophy. One of his greatest contributions was to bring yoga to people all over the world, because he believed that yoga positively benefitted mankind.

What is Iyengar Yoga?

Iyengar yoga is a discipline within the yoga tradition. Some 2000-2500 years ago the sage Patanjali summarised yoga philosophy into 196 "Yoga sutras". Yoga traditions have been passed on, mainly orally, from teacher to student. Yoga in its broadest sense is one of the oldest systems of personal development in the world. It is a complete system for balancing the body, mind and spirit.

At the Iyengar Yoga Centre we teach according to B.K.S. Iyengar’s interpretation of the ’’Yoga sutras.’’

The practice of yoga demands devotion, courage, tenacity and intelligence from the practitioner, but its benefits are far reaching and will assist the practitioner in every aspect of daily life.

Iyengar yoga is not primarily concerned with flexibility. Flexibility is simply one of the many benefits  experienced through regular practice. During class, precise and careful attention is given to physical alignment, timing and sequence. This helps to develop strength, endurance and suppleness - physically, mentally and emotionally. Cardiovascular fitness will improve over time, as will the health of the circulatory, nervous and endocrine systems.

A feature of this form of yoga is the use of props during class. Chairs, bolsters, straps, blocks, mats and ropes are used to refine the poses to give maximum benefit to different physiques and levels of flexibility.

Through yoga you experience a positive state of well being and vitality.

To Find Out More

There is a wealth of information on the history and philosophy behind yoga and its disciplines. Start with www.bksiyengar.com 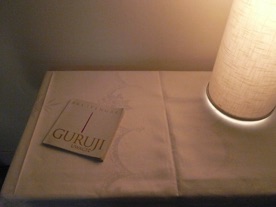